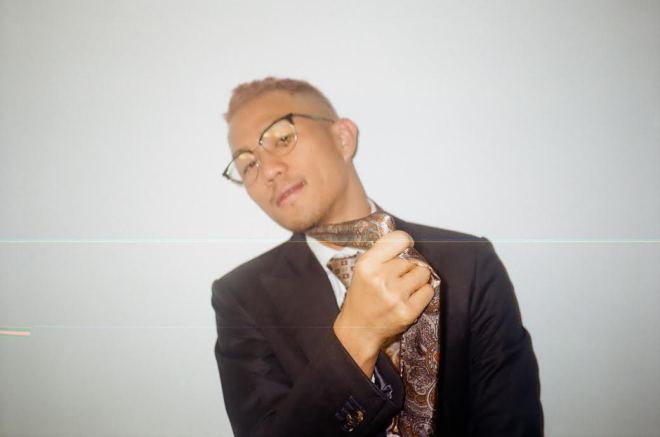 Jinbo is one of those artists who’s name I was always vaguely aware of but I had never explored his music for myself. Until this year that is. This interview doubles as an Artist Highlight piece since this is my first time writing about Jinbo’s work!

In my interview with rapper Young Lion last year, he named Jinbo as an artist he hoped to collaborate with. Jinbo featured on my favorite song from Hoody’s On and On album last year, ‘By Your Side‘. Jinbo has many other notable features in the realm of Korean hip hop, R&B and soul music.

Jinbo’s first LP Afterwork, produced and released independently in 2010, won ‘Best R&B/Soul Album’ at the Korean Music Awards. He has worked on projects with Peejay and Digipedi. He is probably best known for his KRNB projects, the first of which was released in 2012. KRNB is described on Jinbo’s Bandcamp site as “a collection of altered and renovated hits, smoothly tucked into a cohesive project full of nostalgia, and innovation – all of which pay homage to the greats (Seo Taiji; Kim Gun-mo; Deux) and acknowledge the current heavyweights (Girls’ Generation; Taeyang; 2NE1)“.

Jinbo’s KRNB, Pt. 1 EP was released in June of this year. My friends and I recommended some of the tracks on the podcast but I never got around to writing a review. I highly recommend this album. Jinbo brought together some of my favorite artists – Sumin, G.Soul, Hoody, and Crush.

Please check out this awesome documentary from The Cut showing the creative process!

You can find more music from Jinbo below the interview!

I’m JINBO the SuperFreak. I’m a music producer, an artist, and I’m running SuperFreak Records. I’m a crossover between east-west, underground-mainstream, street-media. I like creating new things by doing crossover and hybrid music.*

My style is mixing different styles of music or mixing music from different times. If you mix various ingredients, like in the Korean food “bibimbap”, it can be very nutritious and tasty. I like Dali and Picasso AND Thelonious Monk and Miles Davis; I’m telling you this because I like ‘freak’ and enjoy very classic things. For musicians, The Neptunes, Teddy Riley, Babyface, Timbaland, Jimmy Jam & Terry Lewis, Kay Gee, Steely Dan, Stevie Wonder, Michael Jackson, R. Kelly, 2Pac, EWF, Quincy Jones, Burt Bacharach, and other artists like this have inspired me.*

I definitely think so. First there is a unique sound coming from the language, Korean R&B is similar. If there’s a chord progression that Korean people like, and one song does well, all the songs follow that style. 아마도 다양한 인종이 살고 있지 않아서 그런 것 같다. *

KRNB1 was done by myself almost entirely so the statement was that “I am KRNB”. Whereas KRNB2 is about celebrating the growth of Korean R&B. Now we have a R&B “scene” in Korea and we draw a lot of international attention with our “Made in Korea” music. 이런 날이 오기를 오랫동안 기다려왔기 때문에 기념하고 싶다. (I’ve waited for this day for a long time so I wanted to celebrate it.)*

I think it’s going good. I just wish Korean Music becomes more diverse. I hope it meets more international fans and international influence so it can grow into something that will be helpful to the entire world.

Of course. I wanna work with Dok2, The Quiett anytime, I feel like I should’ve been on Beenzino’s last album, I wanna work with Swings on his album. There is also Keith Ape, Khundi Panda, Yun B, Don Malik, and of course a lot of young talents who are striving their ways up!

My mom is happier than before 🙂 As an artist though, I have more room space to be progressive and fearless now. My standard has gone up also so I want to be innovative with my next albums.

It is way more easier these days to be an independent artist due to the internet and all the apps and mediums. For example, you can release your music and videos on Instagram and just promote the heck out of it and become a star. Someone told me this a couple days ago, “you lose if you’re lazy”. So be busy on your phone and you’ll make your name famous on the net!

Miguel – Told You So

The Killers – Run For Cover

Frank Sinatra – L.A. Is My Lady

Everyone knows that I’m a huge huge Neptunes/ N.E.R.D head. I’m listening to all of their songs. I also love Machinedrum and a lot. My club bangers are Jimmy Edgar, Full Crate, Kaytranada. Frank Ocean makes me really listen to his music. Stevie Wonder is always the truth. Herbie Hancock is also the truth. Steely Dan is like my go-to textbook. Frank Zappa lights up my creative fire. Lately I’ve been listening to 빛과소금, 유재하. They are Korean legends.

I do boxing. I love to go hiking and surfing.

I think it’s a good thing. From getting 0 recognition 40 years ago and look how much recognition we’re getting now. It’s amazing. But don’t forget we are only starting to rise.

Don’t just follow the trends, create your own. Because we all want new things!

*This is my first time attempting to translate an interview myself, so some of the Korean –> English translations are a work in progress. Just wanted to get this up before Christmas because I’m excited/impatient! Check back for more accurate edits soon haha

In the documentary (link above), Jinbo called Sumin the hottest R&B artist in the scene right now. Check out clips of him performing with her here.