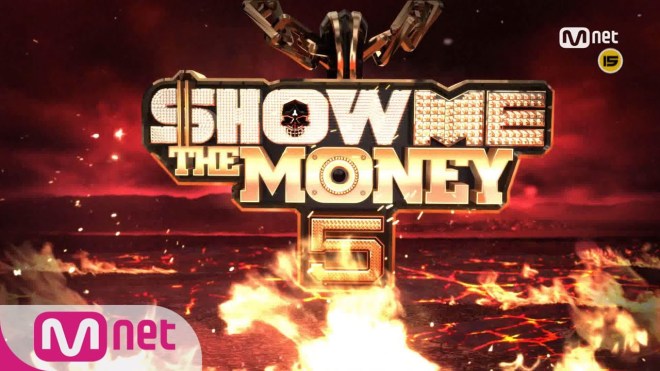 Thanks to Nahae Kim, Kang Yerim and the rest of the team over at Khiphop Subs for all their hard work in subbing Episode 8! You can find links to the episode at the end of this recap. 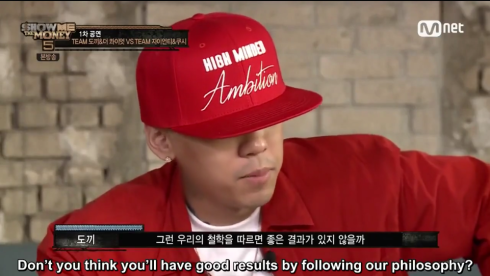 Dok2 explains the philosophy that lead to Team Illionaire’s win in SMTM3 – they didn’t overdo it, but instead told the contestants not to get too excited and to have fun. Flowsik is selected to join the producers on stage. 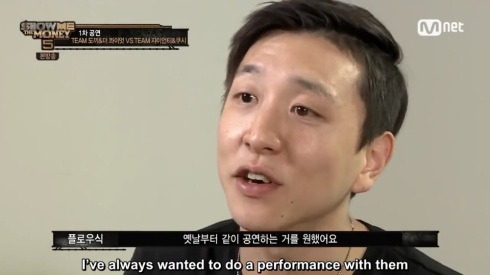 Team YG is in good spirits after their diss battle win. Both Seo Chulgu and CJamm himself expected CJamm to be chosen for the solo stage. To their apparent surprise Seo Chulgu is chosen.

CJamm says he is a little concerned about Reddy but Reddy is carefree because he’s sure they won’t lose to Team Illionaire. This is the best screenshot ever: 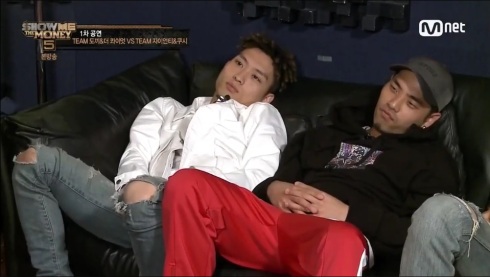 Dok2 reveals the beat to the song ‘Beverly 1lls’ and Zion.T and Kush let CJamm and Reddy have their first listen of the beat for ‘Wanted’.

Reddy puts it so perfectly when he calls the Beverly 1lls song obvious. It’s just what one would expect from Team Illionaire, which isn’t a bad thing but it might not be enough to compete with the new flavor Team YG is bringing this season. 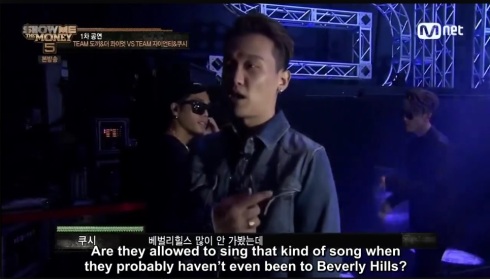 Myundo continues to make mistakes during rehearsal, worrying Dok2 and The Quiett. They’re first up to perform…

This definitely wasn’t the best performance for Superbee (why on earth did they make him wear those pants) and Myundo was sub-par. Next is Reddy and CJamm.

CJamm was flawless as expected but this, THIS is the Reddy I know and love. CJamm’s hair and the distracting dancers aside, this performance was great. The audience was so into it, Kush says “This is the first time they heard this song, right?” Simon D says the stage had Zion. T’s essence.

The audience casts their votes but only the contestants can see who came out on top. They return backstage and let the producers know what happened.

Team YG has won and Team Illionaire has lost.

Next up we have the solo performances, starting with Flowsik. We see him Facetime with his mom and brother (who could be his twin). We find out his brother is the one who introduced him to rapping and gave him the name Flowsik. Flowsik shares the lyrics he has written in Korean and asks Dok2 and The Quiett to critique his accent. During rehearsal, Seo Chulgu is impressed with his delivery.

I never get tired of Flowsik’s voice. Like Simon D stated earlier, you can never underestimate the popularity of the Dok2 and The Quiett. Seo Chulgu looks a little worried backstage as audience members hold their Illionaire signs up high.

Next up is Seo Chulgu. Zion. T and Kush are confident he’ll do well. They prepared a more serious stage that allowed Chulgu to tell the story of his come-up as an artist. Seo Chulgu has a hard time with the in-ear device during rehearsal, saying he’s not used to hearing his own voice while rapping. Will he be able to overcome it?

Olltii! It’s good to see him, I enjoyed his last album a lot. The last part of the song was the most powerful. After the performance is over, the audience chanted Chulgu’s names. The votes are cast but we’ll have to wait til later for the results.

Now we get to see the highly anticipated solo stages from Team AOMG and Team GMC. Between Boi B and Bewhy, one of them will be going home.

Meanwhile his goal is to produce a song with Boi B that will be played at beach concerts all summer. Everyone watches as Bewhy rehearses but Boi B is confident with the song he has to perform. He goes up to rehearse and everyone is impressed. Will Bewhy be able to redeem Team AOMG’s losing streak?

YAAAS BEWHY. I love this song. His performance quality was stellar and his rapping was so good he almost had proud dad Simon D in tears. 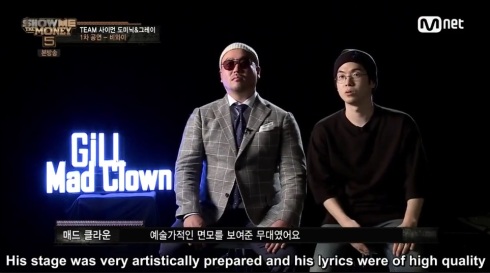 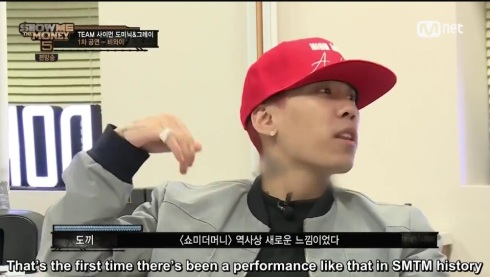 I’d hate to be Boi B in this situation. What exactly has Gil prepared? 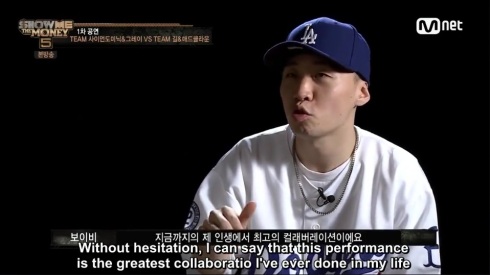 This song is so freaking catchy. This was a really fun, feel good stage. Rhythm Power was a great addition and Boi B was really strong with his rapping. Kim Heungook (the original singer of ‘Swallowtail’) even made an appearance. “They’re cheating”, Simon D yells. 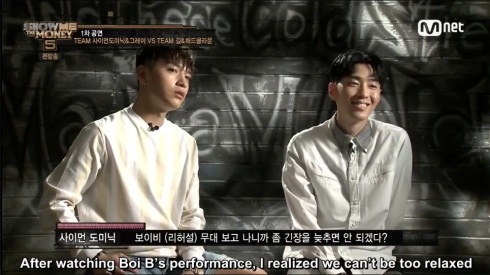 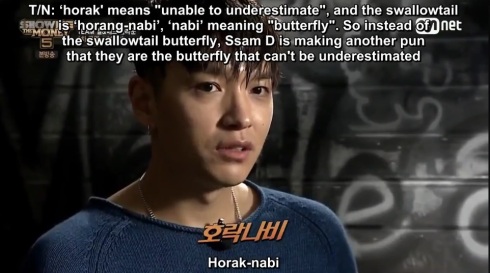 I’m so thankful Simon D has kept the puns coming in Tablo’s absence.

Well, it all comes down to who the audience enjoyed the most. First we get the results from Team Illionaire vs Team YG earlier.

Team YG blows Team Illionaire out of the water and Myundo is sent home. 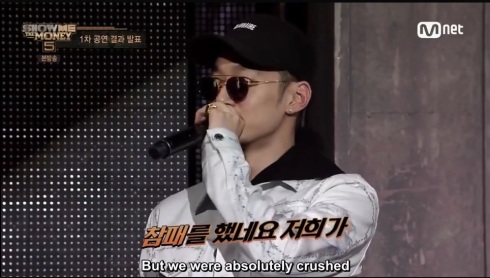 He’ll definitely have to work on his live perfomance skills but I know Dok2 will link up with him for sure. What will Flowsik’s and Seo Chulgu’s fate be?? 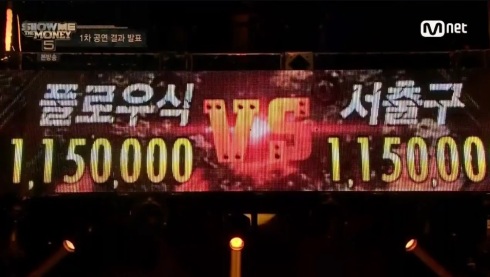 The first round of votes reveals a tie. But who earned more money in the second round?
Seo Chulgu is victorious. Flowsik will be headed back to New York, leaving Team Illionaire with a lone Superbee while Team YG makes it through this round of team battles with their entire team intact.

Now the results of the solo stage performances will be revealed. If Bewhy is eliminated then Team AOMG will be no more. Everyone is on edge and uncertain because Boi B and Bewhy’s stages were so different.

I watched this episode for the second time while writing this recap and waiting for these results still made me nervous. 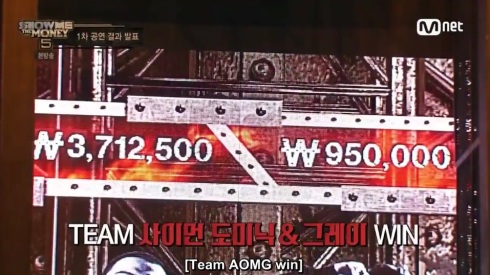 Bewhy has obliterated Boi B despite the success of Gil’s well-prepared stage. Boi B heads home, leaving Sharp Gun on his own on Team GMC.

Three rounds of solo stages are in store for the next episode and it’ll be everyone else versus a rapper of their choice from Team YG. The MC pulls names from a box to reveal who gets to choose their opponent first.

Team AOMG has first pick and Bewhy makes his choice. Who has he decided to challenge?? We’ll have to wait until next week to find out. Stay tuned for the semi-finals recap coming soon!

Thanks for reading! Like the SeoulRebels page on Facebook to stay updated with the latest recaps and reviews!