Show Me the Money 4 recently ended and many of us are already missing all of the foolishness. Thankfully, Unpretty Rapstar 2 began airing last week so we can still get our fill of k-hip hop drama.

In the beginning of Episode 1, the contestants for Season 2 enter a room, one-by-one. Female rapper Heize is the first to arrive.

Heize takes her seat and waits for the next rapper to enter.

Yezi from idol group Fiestar shares that she has “always wanted to rap” and we see clips of what appear to be her training with Tiger JK. It seems that there will be the same disdain for and criticism of rappers from idol groups on this show as there was on Show Me the Money.

I’m not sure if all the shady looks are true personalities coming out, the girls trying to act hard because they’re on a rap competition show or a bit of both.

Next to enter is underground rapper KittyB. 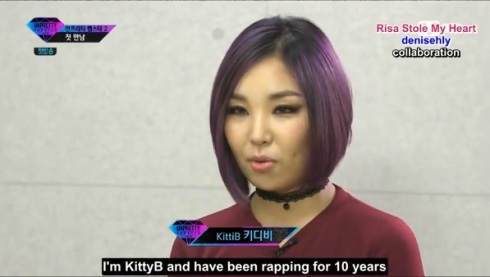 KittyB seems to have released a lot of solo work and she is confident coming in with all of the experience she has.

She says that now…and then follows that statement with “But is there any? I doubt it”. I only have Show Me the Money as a reference point but already the atmosphere between the females is so different.

Next enters rapper Ash-B who has 3 new songs on KBS’s no-play list.

Next to enter the room is Yubin from popular idol group Wonder Girls. Heize comments “When she was walking in she looked like a Barbie doll. Her face is so small.” 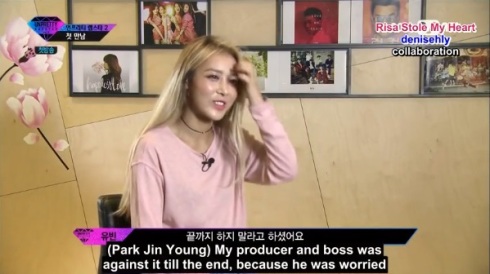 Popular opinion is that Yubin can’t rap but she says she was limited by what she could do as a Wonder Girls member.
Yubin is the friendliest contestants so far and Kitty B tells her she’s a fan. 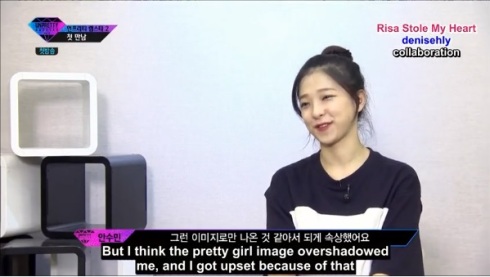 Kasper (who was also was on SMTM this summer) shows up and at the sight of one of the other girls laughs awkwardly and is uncomfortable as she takes her seat. What’s that all about it? We’ll find out soon.

Hyorin, another popular female idol, arrives and the other girls seem confused about why she’s there.

Hyorin says she loves hip hop and is excited that she’ll finally get to show this side of her. Rapper Mad Clown endorses her talent, telling a story about how she once covered for him at a concert when he forgot his lyrics.

Only a few seats remain…

Rapper Gilme (a little older than the rest, she is the only contestant over 30) enters and all the girls say hello and bow.

Gilme starts complimenting the girls left and right on how pretty and youthful they are but Kasper is having none of it. 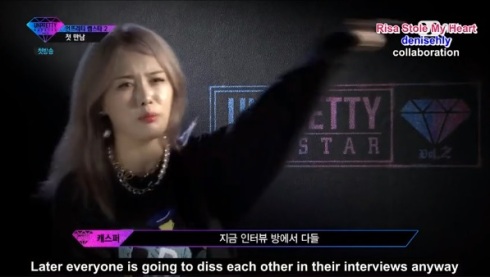 SPEAK ON IT Kasper. She tells no lies…

We see clips of SMTM producers trying to guess who the next contestant might be while listening to a sample of her rapping.

The voice is quite similar to the Queen’s but it is contestant Trudy’s vocals. 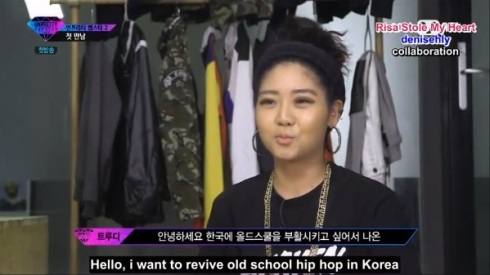 She said she is told all the time she sounds like Yoon Mi Rae and Zico throws out a prediction:

Trudy says that she is determined to show her own voice and doesn’t want to simply be pinned as the second Yoon Mi Rae.

Finally, the last rapper is Sua, a 17-year-old YG trainee. 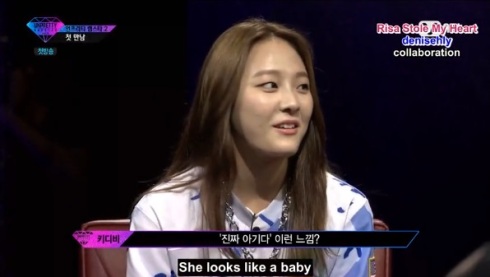 Sua has been training at YG for 6 years and she says she feels the pressure being the first female to follow in the footsteps of Bobby (YG trainee who won SMTM 3 last year) and B.I., another successful YG trainee rapper. 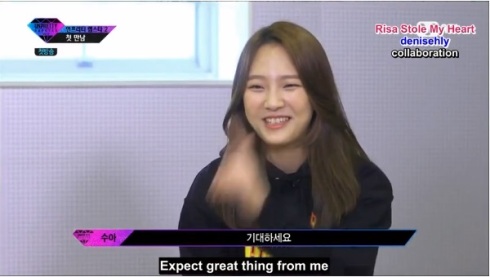 Rapper San-E hosts the show and he’s as animated as ever (but this time there’s no Verbal Jint to help balance him out).  He greets the contestants and gets right to business with his question for Hyorin: 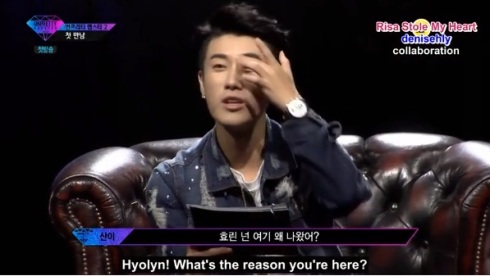 San-E you’re wrong for that and you know it. Hyorin’s response is simply “I may not be good at rap but I like it”. Another contestant asks Hyorin who her favorite rapper is but she hesitates and can’t answer the question…
San E brings up the fact that Ash-B has dissed Kasper in the past (thus Kasper’s reaction when seeing her earlier). Ash-B apparently dissed her because she thought her mixtape wasn’t that good? I’m confused… 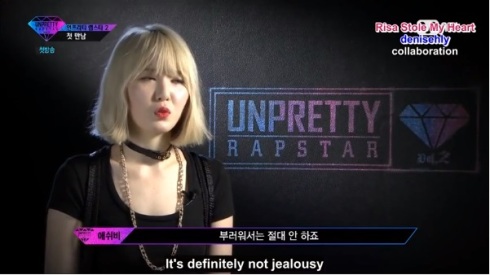 Uh-huh… San-E asks Ash-B if Kasper ever responded to the diss and she says no. 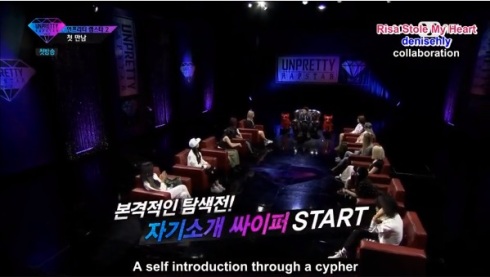 San-E says he’ll start to ease their anxiety. The beat is Future’s song ‘F**k Up Some Commas’. San-E calls out Yubin next and she does really well. Hyorin goes next and Heize comments that it was better than she expected while Yubin says she thought it was cool.

KittyB is next but she messes up and everyone’s high expectations for her are brought low. San-e’s “bish whet?” face when she asked him to change the beat tho… 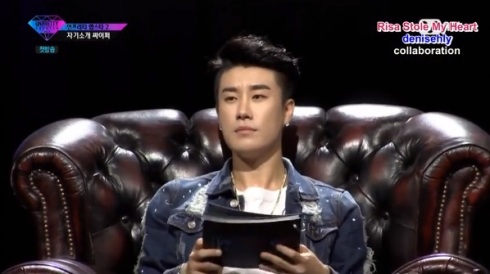 KittyB starts over and messes up again…

Pride comes before a fall. Maybe she’ll redeem herself later.

Next up is Trudy. She was SO good, even getting San-E to stand to his feet. Gilme is next but seems to be winded after (are you taking your vitamins, Gilme?) and after is Heize followed by Yezi followed by Ahn Soo Min who calls out Sua. 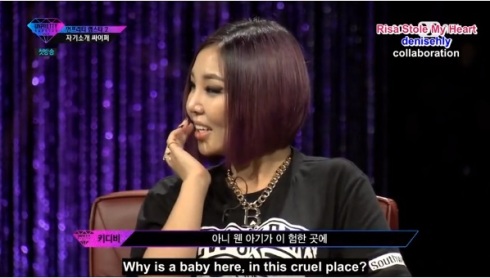 Sua surprises everyone (and San-E freaks out about it) so it looks like she’ll be able to hold her own in this competition.

Kasper goes next, standing and walking toward Ash-B and everyone looks around like it’s about to go down. 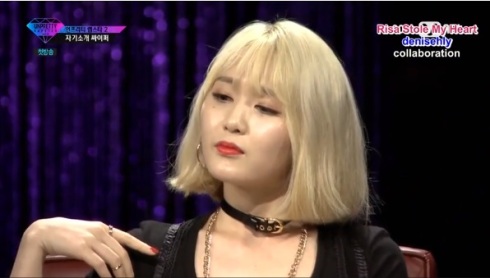 Kasper takes a seat when she finishes and asks “Is there anyone left?”, completely forgetting (or ignoring) the fact that Ash-B hasn’t gone yet. Ash-B starts strong but falls apart and Kasper couldn’t be more pleased.

San-E introduces the first track mission, which will be a collaboration mission with all 11 rappers. They will be working with
top Korean producer D.O and top music video film director Hong Won Ki. The rapper who has the weakest performance will be eliminated.

Trudy is confident she can stand out because of her unique voice. As the girls prepare and decide who will rap when, Yezi looks lost… 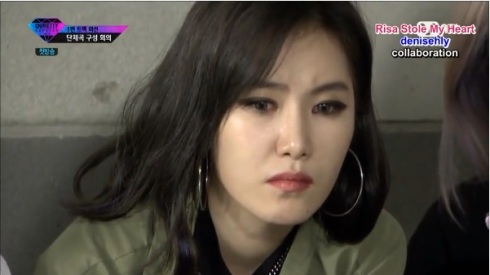 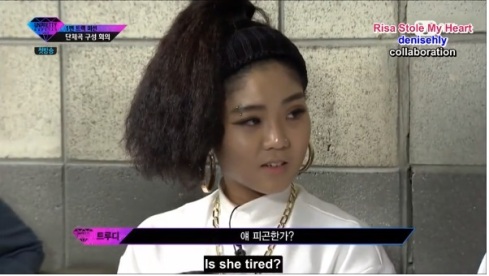 I’M DONE haha Trudy is trying to figure out what’s going on with her.

As they practice, everyone is impressed with Sua’s energy. Heize makes a cute attempt to protect Sua’s innocence from Ash-B’s inappropriate lyrics.

Gilme is next and her lyrics are all jumbled together. She just has lazy delivery. WHAT IS GOING ON GILME? ENUNCIATE PLEASE.

Everyone decides Trudy should get the bridge. On set, Yubin jumps into a director role, helping people arrange themselves and Hyorin helps out too. Meanwhile space-cadet Yezi is still confused…

HAHA I want to believe so badly that Kasper’s reaction below is indeed a reaction to Yezi’s strange behavior and not just clever editing.

All the girls pick out their outfits and get their hair and makeup did. Sua is new to all of this and is struggling a little bit.

Kitty B comes out of her dressing room and everyone cracks up because of all the commotion she caused changing.

Someone get this woman an IV…The video is being filmed in one take but they have to keep stopping because Gilme messes up several times. Sua waits patiently for Gilme to get through her part so she can go. 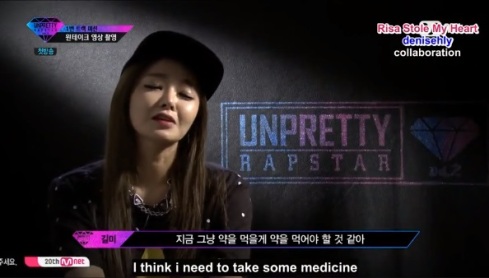 Same here, Gilme, same here. These Mnet producers…there’s a whole sequence where ‘Do you want to build a snowman’ plays as Sua waits for her turn. 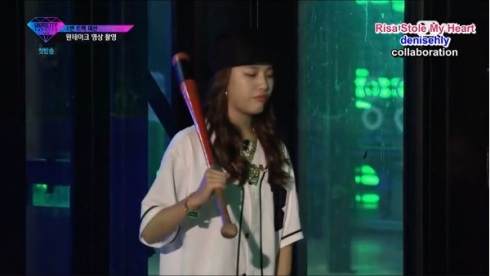 Gilme finally finishes but then Hyorin is struggling as well, earning her plenty of side-eye from Ash-B of course.

Finally, the directors allow her to lip sync and everyone else is like “Seriously??” 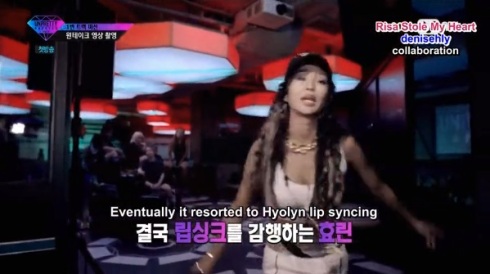 Oh, did it Hyorin? It’s kind of sad how surprised she is by this.
As the girls sit down to watch the video, Hyorin looks worried while Sua shares that she had fun during the process. 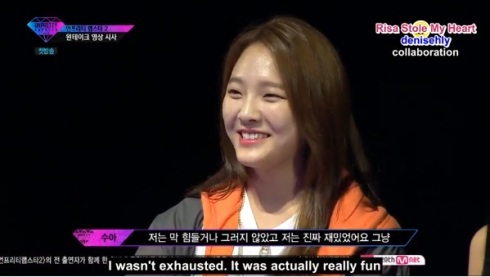 Such youth.  Gilme just said the whole thing was difficult. We see that behind the scenes, Trudy and Sua are bonding fast. 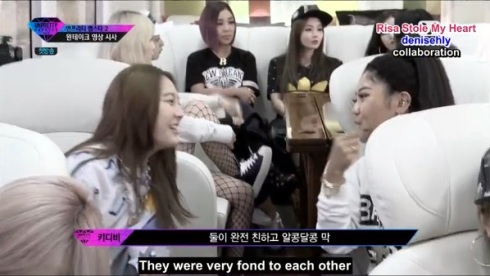 As the girls watch, Hyorin still looks worried. Everyone is disappointed with her performance including Hyorin herself. 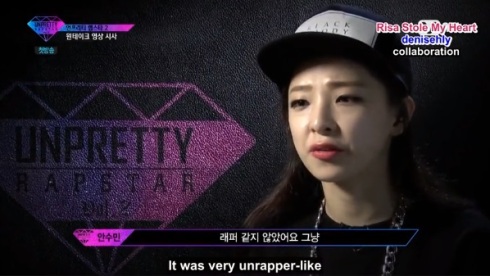 Hyorin isn’t the only rapper that thought her performance was lacking however.

Kasper said KittyB’s rapping was forgettable and it seems her figure drew the most attention. Welp. Sua does well and Heize and Trudy thought Yubin did a great job. Watching Trudy watch herself is priceless. San-E asks for her thoughts and she replies that she thinks everything turned out well. 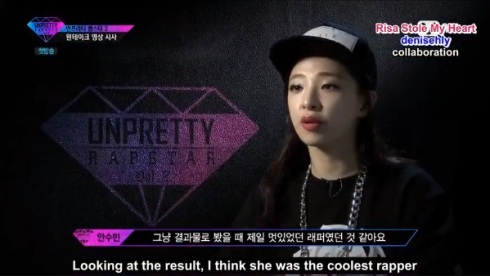 Ash-B is asked who had the most NGs during the shoot and Hyorin’s name comes out of her mouth.

Yubin tries to defend Hyorin, saying her lip syncing was justified if it was meant to preserve her voice. The 11 rappers must each vote for who they believe was the best rapper and worst rapper and of course, their votes won’t be anonymous. San-E is eating this up, as he reveals his vote first. He picks Trudy as the best rapper and Yubin, Soo Min, Yezi and Gilme all voted the same. Ash-B voted for Heize because she thought her acting at the beginning was really good and Kasper and Trudy vote for Heize as well.
There is a dramatic pause as everyone waits to hear who Sua voted for.

It comes down to Hyorin’s vote to determine whether Trudy and Heize will tie or Trudy will win. It’s revealed that Hyorin voted for Trudy, making her the winner.

Now its time to reveal the votes for the worst rapper. Man, this is going to be brutal… 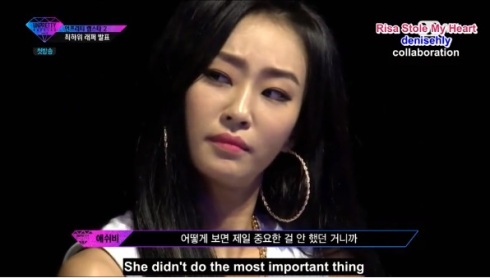 Things aren’t looking good for Hyorin. She begins to explain why she chose to lip sync, saying it was because she didn’t want to make everyone wait. Yubin, who stood up for Hyorin earlier, gives her a disapproving look. 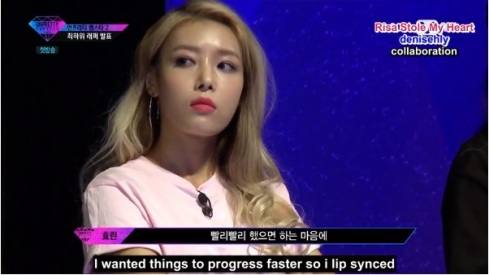 Yubin says she would have voted differently if she had known the real reason why Hyorin ended up lip syncing. 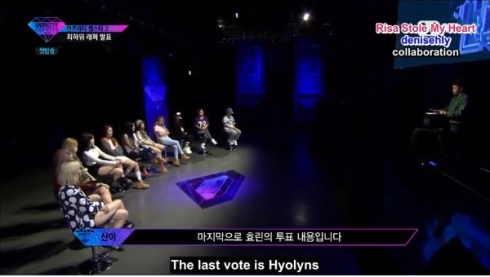 Hyorin votes for herself but that’s not allowed. San-E says it doesn’t count but she has still received enough votes to send her home. 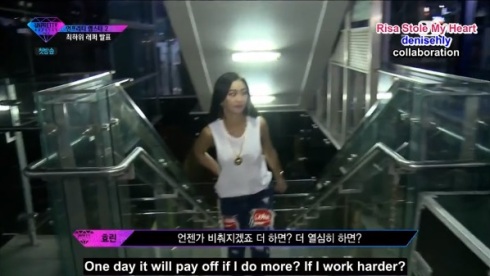 Yubin is sad to see her go but thinks Hyorin should have tried harder. Trudy will get an advantage for the next round since she won this mission. San-E announces that out of the 9 rappers left Trudy will have the power to exclude someone from the next mission. 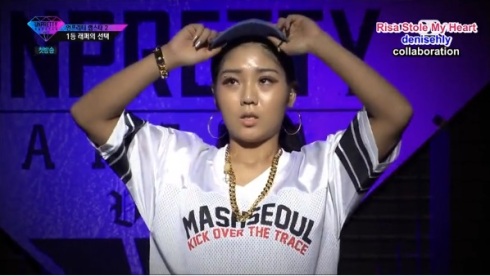 It must be stressful to have to make enemies so quickly. I have no idea who she’ll choose to ban from the mission but of course we’ll have to wait for episode 2 to find out.

You can watch the video the ladies produced below! Check back here for the next recap soon.