Shout out to Oogee Woogee (hip hop news source mentioned in the It G Ma post) and their Youtube series IN SEOUL for this interview with Snacky Chan and his thoughts on American and Korean hip hop.

Snacky Chan is a Korean-American artist (born Roy Kim) hailing from Boston and New York. He was a member of Korean hip hop group Uptown (along with Swings) and was featured on Show Me The Money 3. He started the label Dynasty Muzik in 2011. You can follow him on Twitter here.

Hip hop artist Danny Chung (formerly known as Decipher) from Philly hosts the interview. He mentions in the beginning of the video how he looked to up to other Asian American artists like MC Jin, the Mountain Brothers and Snacky Chan as he got serious about his career in hip hop.

[On a side note — My friend Charles introduced me to the Mountain Brothers in a class we took together (Asian-Black Relations in the U.S.: Theater and Performance, shout out to Professor Son!!). They’re dope, check them out below.]

Snacky Chan talks in the beginning about how hard it was to support himself in the U.S. while trying to pursue music. He moved to Korea where he figured he’d be better able to work part time while working on an album. He also talked about opposition from his father and the parental pressure to give up pursuing music.

He speaks about his stint with Uptown hesitantly, mentioning an uncertainty about how others would respond to his involvement with the group (maybe this is hitting on tension between the underground and more mainstream hip hop), but he says it did allow him to see “how the Korean music industry works on a major scale”. 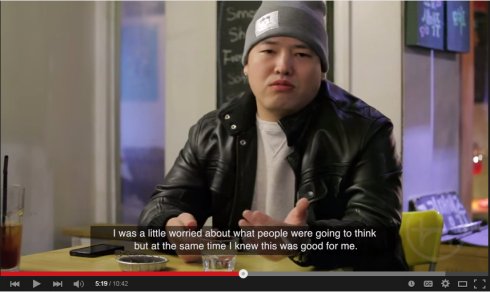 One main difference Snacky Chan cites between Korean artists and their American counterparts is the appeal of the “gangster image” in the West (he specifically mentions the street cred artists gain if they’ve sold drugs as an example) and how in Korea if an artist were to do the same or even smoke weed they’d be out of the game. Of course the “gangster image” he references is only true for some hip hop here in America but it is probably the main stereotypical image that is most mentioned or broadcast to other parts of the world.

He and Danny Chung discussed the shift of power within the music industry from managers and companies to artists themselves doing what they refer to as ‘indie’ or ‘grassroots’ promoting with the rise of the Internet as a major self-promotion tool.

Keith Ape’s It G Ma is a perfect example of this, a single blowing up thanks to a free download on Soundcloud and Twitter. Danny Chung uses the term “independent hip hop” in reference to this phenomenon. 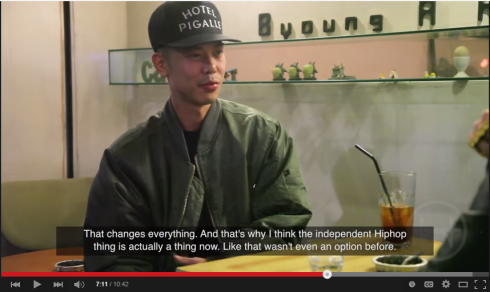 Snacky Chan says that before the birth of ‘independent hip hop’ in Korea, since the mid 2000s the only outlet for artists to get exposure or be promoted was through television. He claims that it was hard to get on these shows unless you had personal connections to the manager of the station or the PD and Danny chimes in saying that then it wasn’t really about your music or your talent but who you knew.

Snacky Chan gives Illionaire Records a shout out saying he believes they were probably the first label to get out there and be there own bosses, followed by labels like Hilite and Just Music.

I really appreciated this interview and am looking forward to the other videos in the IN SEOUL series. Make sure to check out the Oogee Woogee Youtube channel here.